It’s not very easy to describe the Sound of this fairly young Band from Austria, some may just describe it as the typical style of the recent Deathrock revival, or in other words ‘just another Christian Death Clone’. Doing that is far too easy in my opinion, of course there are similarities to Christian Death, but it’s Deathrock, you will always find similarities to Christian Death. But enough about me rambling on about how much I hate people that have preconceptions about newer Deathrock Bands only because a few of them became popular (and we all know how ‘uncool’ that is).

Strange Dolls Cult was formed in 2005 and they released a 7” in 2007 titled ‘Puppets Dance’ which got a pretty good review from Mick Mercer (http://mickmercer.livejournal.com/696679.html). On this single you will find ‘Puppets Dance’ and ’Ruins of Western Civilisation’. Beside some releases on Samplers and a Demo Tape floating around the Internet , they didn’t released another EP or Album yet. With the latter one in production at the moment. (In the last mixing stages to be exact)

The first thing you will notice when listening to the 7” and especially the first song ‘Puppets Dance’ is that everything is there as expected, a solid Base, good percussions and nice Guitar Riffs. But then it goes further, the vocals come in, and you go on a nightmare trip through a manic brain. Music and Vocals work together to evoke this strong and powerful atmosphere that became so rare in Deathrock over the past few years. (You can listen to ‘Puppets Dance’ at their Myspace page)

What made me fall in love with them was that you can actually hear this guys (and girl) were really having fun just performing (It reminded me a bit of the 'fun-attitude' you hear when listening to Anorexic Dread… and that always gives me a warm and fuzzy feeling), this only became more obvious when watching live clips.

So if you are up to give something new a try, get the 7” and help a really promising new band to some well deserved fame.

Email ThisBlogThis!Share to TwitterShare to FacebookShare to Pinterest
Labels: Deathrock 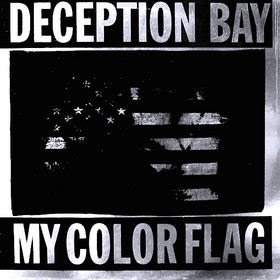 Deception Bay is definitely one of those bands where you tell yourself..."damn why didn't I discover them sooner"!?. This has to be one of my favorite bands/albums that have come across my path within the past year. Many thanks to DJ Delecti who was eager to play for me some freshly new acquired goods in his apartment one drunken evening. Thus was presented to me 'My Color Flag'. The first Track 'fortune days' immediately sucks you in with thunderous drums, basslines,distorted guitars and atonal vocals and the rest of the album never falling short. Dark, guitar oriented post punk that references Savage Republic and Joy Division.
This was there 3rd and final release off of Independent Project records known to have release such bands as Savage Republic, Kommunity FK, Red Temple Spirits, For Against, and Autumnfair.
A raw and subtly powerful album, sure to not disappoint!

There is also a Myspace page www.myspace.com/deceptionbays
Posted by Slow Pulse Girl at 17:53 8 comments: