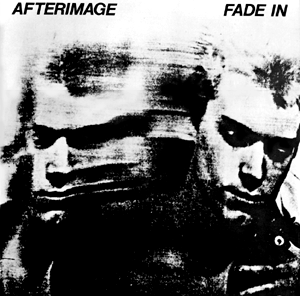 AfterImage came out during the blooming LA underground music scene sometime in 1980. They haunted local clubs such as the Whisky, The Hong Kong Café, Club 88 and the Brave Dog, playing with the likes of Suburban Lawns, Savage Republic, and Middle Class. In 1981 they released one 7" single and a 12" ep Fade In, a very powerful debut EP containing the usual moody post punk formula of 'thunderous rhythum, threatening bass, and haunting vocals'.
AfterImage were :
vocals and sax: Daniel Voznick (aka Alec Tension)
guitar and keyboards: A Produce
bass: Rich Evac
drums: Holland DeNuzzio

Tracklisting*
Side A
Surf Generator/Part Of The Threat
Relapse
Soundtrack
Side B
Afterimage
Satellite of Love
No Dreams
Posted by Slow Pulse Girl at 10:18